Invasion: Julian Stockwin's New Kydd Novel Focuses on Robert Fulton and the Invention of the Submarine 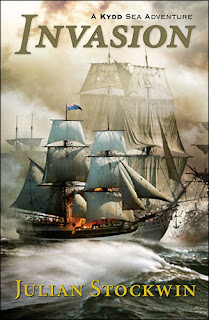 The tenth Kydd Sea Adventure has just hit the bookstores and online shops. Author Julian Stockwin has pulled out all the stops as he explores the links between real life American inventor Robert Fulton (he of the steamship) and Napoleonic France, as well as Great Britain. Seems Fulton has invented a couple of newfangled naval weapons which he calls the "submarine" and the "torpedo." Trouble is, he can't get anyone to believe in them--or in him. Eventually Kydd is called upon by the Navy to assist the inventor. Skeptical of the inventions, Kydd must face a whole new type of warfare.

Author Julian Stockwin reports in his e-zine BOSUN'S CHRONICLE that the Victory (Horatio Nelson's flagship at Trafalgar) will not be sold but instead will be included as part of the new Museum of the Royal Navy. To celebrate, Victory launched an impressive rolling broadside. Here's Julian's report:

Victory herself launched this new initiative with an impressive firing of 64 cannon on September 18. The rolling broadside was launched by the ship's commanding officer and consisted of 50 random gunshots running from forward to aft. After a short delay this was followed by a further 14 shots using each of these guns in an impressive finale. Amazingly, given the spectacular nature of this event, the amount of gunpowder used was less than the gunner onboard at Trafalgar would have used for a single shot.

Douglas Jacobson, author of Night of Flames, posted a guest article for "As the Pages Turn" book blog. In it he discusses what it takes to write good historical fiction, and describes his own research into WWII.

Getting it Right . . . Doing Research for Historical Novels

As the old saying goes, “The devil is in the detail.” One of the reasons I have always loved historical fiction is that it is a truly marvelous way to learn a bit of history. Some authors of non-fiction (Stephen Ambrose comes to mind) have a flair and style of writing that make their work enjoyable and easy to read. But, in my humble opinion, there’s nothing quite like curling up with Herman Wouk’s War and Remembrance or Ken Follet’s Pillars of the Earth for the ultimate reading experience . . . and, a great way to learn history.

And that brings us to the issue at hand. Writing good historical fiction places a special burden on the author, the burden of getting it right. (Read more at "As the Pages Turn.")
Posted by McBooks Press, Inc. at 11:35 AM No comments:

Win a Set of All Nine Kydd Sea Adventures! Plus the New Stockwin's Maritime Miscellany!

Julian Stockwin, author of the Kydd Sea Adventures is offering visitors to his website the chance to win his books--and a handy jute Union Jack tote to put them in.

http://www.julianstockwin.com/Contest.htm
Posted by McBooks Press, Inc. at 5:22 PM No comments: 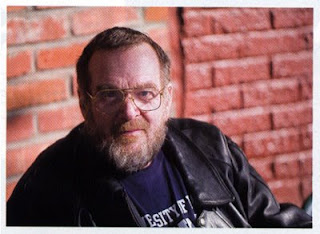 McBooks Press author George Kimball was recently profiled in the Kansas Alumni Magazine. The article, by Tom King (a freelance writer from Lawrence), covers over 25 years of Kimball's colorful career as a sportswriter and his process of writing Four Kings: Leonard, Hagler, Hearns, Duran and the Last Great Era of Boxing. Kimball, class of 67, spoke about the Four Kings, especially Roberto Duran, at Kansas University's Hispanic Heritage Month clebration. "George Kimball has penned a knockout," writes King.
Posted by McBooks Press, Inc. at 12:35 PM No comments: 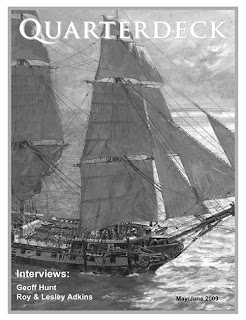 The May/June 2009 issue of Quarterdeck, our bimonthly newsletter of the world of historical fiction written by George D. Jepson is available for download at McBooks.com.

This issue features interviews with: English marine artist Geoff Hunt, who chats about his career and new book, The Frigate Surprise; and British naval historians and archaeologists Roy and Lesley Adkins, who describe their approach to researching and writing about the Age of Fighting Sail.

Please notice that if any of the interviews, articles, or reviews in Quarterdeck tempt you to purchase some the the relevant books, there are book cover links in the PDF file that take you to the appropriate pages at the McBooks Press website. 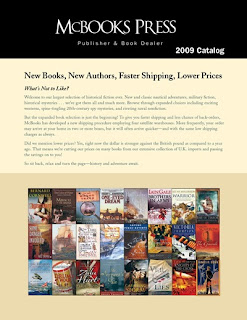 Our 2009 PDF Catalog is ready for you to download! It contains the best historical fiction books — nautical and military — that we sell to individuals. These include all McBooks Press publications in these categories, as well as hard-to-find and imported books from other publishers. Browse through expanded choices including exciting westerns, spine-tingling 20th-century spy novels, historical mysteries, and riveting naval nonfiction. To give you faster shipping and less chance of back-orders, McBooks has developed a new shipping procedure employing four satellite warehouses. More frequently, your order may arrive at your home in two or more boxes, but it will often arrive quicker—and with the same low shipping charges as always. Right now the dollar is stronger against the British pound, that means we’re cutting our prices on many books from our extensive collection of U.K. imports and passing the savings on to you!
Posted by McBooks Press, Inc. at 10:27 AM No comments: 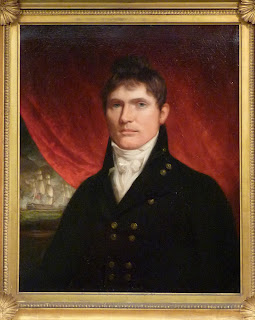 Recently Julian Stockwin, author of the Kydd Sea Adventures, was sent this image by a fan of his Kydd novels. Apparently this is the real Thomas Kydd, and Julian never even knew he existed!

Julian was gobsmacked when he received this photo from Shipmate Sim Comfort! Browsing among the items in an art auction recently Sim had come across a portrait of one Thomas Kydd, master’s mate of His Britannic Majesty’s Royal Navy. The painting dates from about 1800.

Visit Julian Stockwin's website to learn more interesting information about Thomas Kydd and the Age of Sail .
Posted by McBooks Press, Inc. at 12:08 PM No comments: 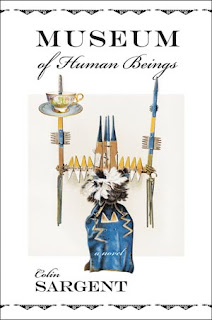 Michelle Dover, book reviewer for The Steamboat Local (Steamboat Springs, CO), recently focused on some historical novels--including Museum of Human Beings by Colin Sargent--which she says help minorities and women find their place in history "thus reclaiming a past that isn’t readily available in the history books." Here's her take on these fascinating novels.

Get Lit
by Michelle Dover

The Amazing Adventures of Human Beings

Yes, yes, we all love the founding fathers of the United States of America. Their biographies always have a hold list at the library when they arrive from the publishers. Authors do a brilliant job of recreating these men’s lives through the plethora of documents left behind.

In the last decade more and more readers have turned to historical fiction to fill in the gaps left in history. (Read the full article.)

Purchase Museum of Human Beings, by Colin Sargent at McBooks.com 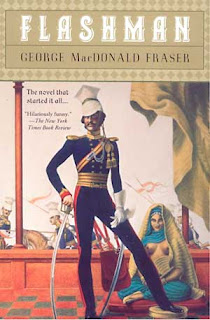 The first installment of the Flashman Papers sees the rotter from Tom Brown's Schooldays commence his military career as a reluctant secret agent in Afghanistan. Expelled from Rugby for drunkenness, and none too welcome at home after seducing his father's mistress, the young Flashman embarks on a military career with Lord Cardigan's Hussars. En route to Afghanistan, our hero hones his skills as a soldier, duelist, imposter, coward and amorist (mastering all 97 ways of Hindu love-making during a brief sojourn in Calcutta), before being pressed into reluctant service as a secret agent. His Afghan adventures culminate in a starring role in that great historic disaster, the Retreat from Kabul.

Subscribe to McBooks Press News and receive posts by e-mail